I have been visiting Greece on and off since I was very little but it has only been in the past 8 years that I would spend time there on the regular. There is something magical and authentic about this country that keeps on drawing me back like a magnet.

I absolutely love all other Mediterranean countries as well but Greece, esp. the Greek islands remain the dearest to me. There are about 6000 islands in the country and over 220 are inhabited. We certainly are bombarded on social media with all the mainstream locations but people at large have no idea how much more this sector has to offer!

Little did I know as well until my Sailweek Greece trip…

Last year I had the coolest opportunity to participate on a 1 week sailboat trip on the Saronic Sea with the Sailweek team and my fellow travel blogger, themacarongirltravels. I had never been on such an adventure and I had no idea what all those (at least to me) unknown destnations in the area had in store for me.

At first I was little sceptical for never hearing of the Saronic Sea or of its islands but one thing I knew, it couldn’t possibly be as bad since I would be sailing around in my favourite Mediterranean country, would be at my favourite medium, i.e the sea and would do all this along with a blogger friend, in summer time. So hey, why not set sail!

We obviously did all the necessary paperwork and logistics in advance, the team was very informative in the preceding months and they made well sure that we would be totally prepared by the time of our arrival.

Please do follow the advice of packing lightly! There isn’t much space on a sailboat and you need to share it with 8 other people, so take only the real necessary items you would take on a vacation otherwise you will have to constantly stumble over your stuff as I did. But do take many bikinis and a good sunscreen and a lot less shoes you would think you need…

The trip
We decided to drive down to Athens one day ahead of our trip while others chose to catch a flight. We embarked our sailboat at Alimos marina along with 6 other girls from the US and our funniest, coolest and most competent skipper, Stelios.

But we were not the only yacht to take on this adventure, there were 2 other sailboats sharing this trip with us under the aegis of Sailweek Greece thus we set sail for our island hopping adventure as a big happy family of 3 boats.

Agistri
Our first stop was only a few hours away from Athens. Once we set foot on the boat, the skipper guided us through and informed us of all the vital data we had to know to coexist in peace and harmony during that coming week. That took as little as 10 minutes and afterwards the yacht was ready to be taken over by 8 lively girls. Right after we settled in our cabins we changed into our bikinis and started soaking in as much sun on the deck as we possibly could until our arrival to Agistri.

We anchored at the port around sunset so we soon went out for dinner, the team already had their fav restaurants arranged for us. Again, Greek cuisine and hospitality did not let me down.
Our first sunset was also as amazing as it should be which was followed by medium-term night walk to the island center. The town was very much alive, full of restaurants, souvenir shops and rather local than international tourists.
It happened on this island to realize I had made one of the best choices in my life when signing up for this trip. The place was filled with Greek vibes and authenticity.
Next morning while everyone else was asleep we went to further explore the beauties of the
city. My fav spot on the island was undoubtedly the blue capped white church, very much identical to the ones you see on Santorini postcards.

So we took some shots and then rushed back to the port, not to miss our ride or the amazing brekkie prepared by our skipper.

Hydra
We arrived to Hydra during the day so we did what normal sailing crowd would do: eat, swim, get some sun and have some fun on repeat. The less brave ones went for paddle boarding, the more brave ones also had a chance to try paddle skiing which wasn’t much of a challenge for a seasoned kite surfer as myself nonetheless it was the most fun. Later in the afternoon we changed into our clothes, put some make-up on and took a water taxi to explore the heart of the island. We tried everything Hydra could offer from donkey riding thru boutique hopping to front row sunset watching from a hill-side restaurant while sipping virgin Pina colada. This island truly represented what a bit fancier but authentic side of Greece was all about. You couldn’t t help but picking the holiday vibes up.

Ermioni
It was bit of a shorter sailboat ride from Hydra to Ermioni but what I loved about it was the option of anchoring right at the city centre where all the restaurants lined up. Once we got ourselves recharged with delicious souvlakis, gyroses and tzatzkis, we took a hike to the highest spot of the island to get the best sunset view and some beautiful pix.
Timi and I also discovered here the biggest flower tree we had ever seen, the famous bougenvillea tree, although it was on a deserted plot with a fence around, we agreed to wake up early next morning to climb over the fence and fulfil our blogger duties regardless. The pictures speak for themselves!
Spetses
Our next destination was Spetses which truly captured my heart although it was a bit of a feat each time to disembark. As we couldn’t directly get anchored on shore we had to use dinghys to be able to set our foot on land but the scenery and atmosphere made up for all our efforts.
While some stayed around the boat and enjoyed their daytime out in the sun, others opted for laying out on the beaches nearby or exploring the location on foot. The island is rather big as opposed to the rest we had been to, regardless cars are not allowed, scooters are. They have cute little pebble beaches with crystal blue waters and only a few locals around, excellent seafood and Greek restaurants all alongside the picturesque road leading to the center and some really pretty mansions up on the hills. When you enter the island you get the feeling of a distant, secluded place and you feel as if you had just dropped into an old-time movie, esp. when you see the horse-drawn carriages cruising by. My favourite moment was to find another beautiful flower tree this time in light-pink color and to swim at one of the small beaches with practically noone around.
Dokos
After leaving Spetses we headed for a very special place, an almost fully deserted island having as many as 2 inhabitants, an old lady and her donkey. The scenery was a bit wild and untouched, different from the previous sites and had its own beauty thereby. What was also unique here that the whole flotilla spent the evening ashore to have BBQ on the beach. The skippers had made all the arrangements, bought the fish and meat, brought the tools and also cooked the meals for us. It was one of a kind, super moody experience and the food was delicious!
After the feast, while others spent a bit more time ashore I headed back to our sailboat and chilled on the deck, enjoyed the view and silence.
Poros
Our route to Poros was not without some excitement as the sea decided to get a bit wilder this time. Only those remained dry that stayed inside the yacht, otherwise the raging sea was splashing all over the deck but it was worth experiencing, something that anyone at sea should go through at least once. We had no worries at all since our
skipper was well prepared and always in control. By the time we approached Poros the water calmed down and the weather cleared up so we could witness one of the prettiest ports we have ever seen. This island is a true gem! The whole city was built on a hill overlooking the Aegen Sea, houses lie very close to each other and are connected with narrow and moody little streets. Downtown there is a wide selection of restaurants, taverns and shops. For those who seek adventure, there are several water sports centres around with many “toys” and you can also rent quads to have some more fun as some of our guys did. Timi and I decided to dive into the city and some shops and to also explore the hill where we ended up next morning for a rooftop shooting session.
That was our last day and night out at the Saronic Sea so we decided to go clubbing a bit but beforehands we organized our own party on the sail boat and played a cool game involving alcohol and papercups a.k.a the flip-cup game.
Back to Athens
On our last day with Sailweek we headed back to Athens but before we reached the capital we had another way-stop near a smaller island to dive and chill. I had one of the bests experiences of my life here as I managed to get Stelios (the skipper) to pull me up with a winch to the top of the mast. This was utterly at my own risk as it was quite dangerous and was definitely not part of Sailweek bag of tricks. But I luv challenges so we did it anyway. It was scary and amazing at the same time and man, the view…. will never forget about this favour!  After 1 hour or 2 we were on the move again and by late afternoon we made it to the marina. After tidying up our spaces the whole crew went out and had a great last dinner together.

Overall impression
What was great about this whole trip that although there were many mutual activities and plenty of options to try new things out, you were never obliged to do anything and felt free to do whatever you felt like doing the most at any given moment. There were some basic rules to follow but other than that it was very much like a super cool class excursion without teachers. I also learnt a lot about sailing, steered a sailboat, learned how to tie sailing knots and had to opportunity to discover new spots on this planet that I know 100 sure if it hadn’t been for Sailweek Greece I would never discovered on my own and that Im very grateful for.

Travel tip:
if you manage to get your friends on board as well and go thru these experiences together, not to mention to gather up as many as to fill the whole yacht (8 people altogether) and have it all for yourselves, I guarantee you it will be an experience of a lifetime!

I hope you enjoyed my little résumé, this trip was definitely a bucket list item of mine I had not even been aware of. If you like adventures and a bit tired of the all too popular places and want to explore some hidden gems in Greece, this trip is definitely for you! 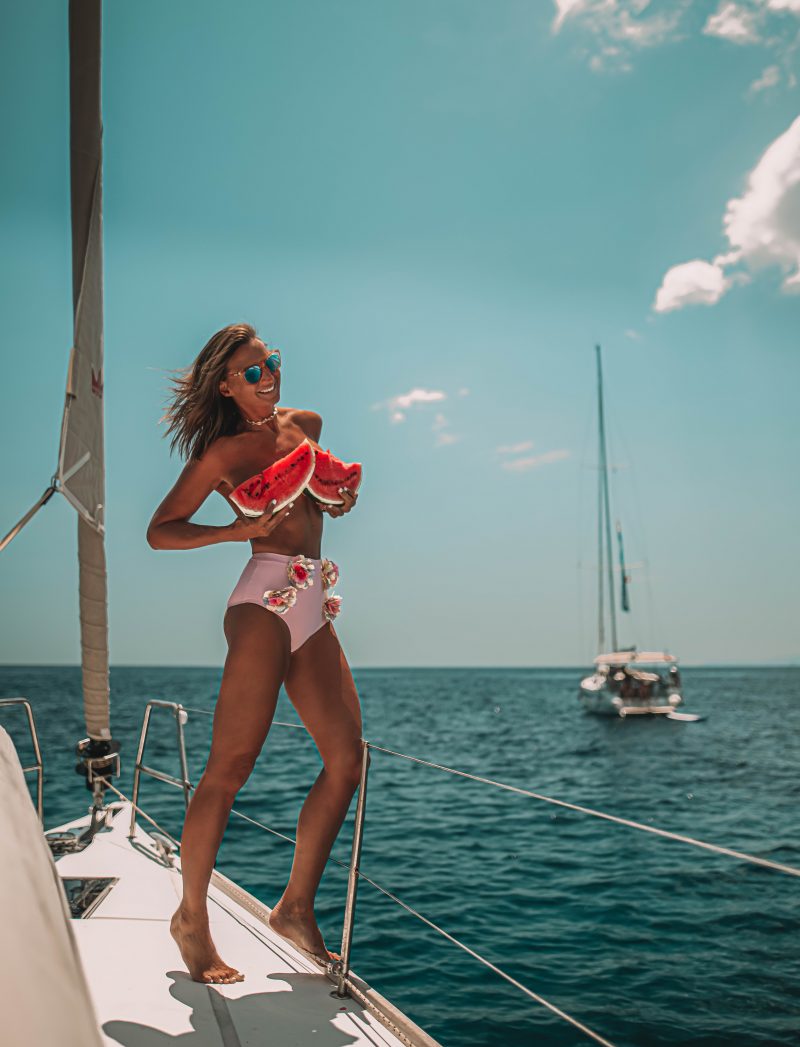 Dream Trip on the …